I watched as a woman walked into a restaurant and was seated by the hostess at a corner table in the main dining area. The hostess placed the menu at a seat that faced the restaurant, which the customer initially took. But after the hostess left, the young lady moved to a position where her back was to the crowd. Why?

Maybe I misinterpreted, but it seemed like she was avoiding eye contact with anyone else in the room. Obviously there could be many reasons beyond what I could discover; but regardless of those reasons, it made me sad. I wanted to yell across the room, “Don’t shun the world just because someone hurt you!”

Jesus was quite familiar with rejection. Probably the most glaring example was the dramatic turn of events during the final week of his life. He entered the city of Jerusalem to praise and adoration, but by the end of the week, the crowds were yelling for his crucifixion. What happened?

Most likely disappointment. The people expected Jesus to be a political rival to Rome and oust them from power. When he didn’t, they became disillusioned. But Jesus didn’t come to set up a political kingdom; he came to save people from their sin by his death and resurrection.

There is an important lesson for us in both of these stories: don’t undervalue the power of the cross.

The woman at the corner table should understand – Jesus endured the cross so that she could be free from whatever shame, guilt, prejudice, or fear she might be feeling that would cause her to avoid interaction with other people. The death of Christ has a very real personal impact for every relationship for every individual.

Secondly, the message of the cross is that Jesus died to establish a spiritual kingdom to which each of us has been given the opportunity to enter. Its appearance and purpose is not like other kingdoms. Don’t be disillusioned. His kingdom is a kingdom of the heart, where freedom is established inside because we are no longer ruled by the powers of darkness.

Those in the crowd who demanded his crucifixion didn’t want a kingdom where they must relinquish control of the their deepest thoughts and intentions. But that is what Jesus requires. That is the key that allows you access into the kingdom. And for those who are willing to enter and be ruled by Christ, there is peace, comfort, and acceptance like no other power on earth can grant.

As we begin Holy Week, take a look inside and see if there is any part of you that has rejected the Kingdom of God. The blessings and benefits are well worth whatever may be keeping you from being fully committed. 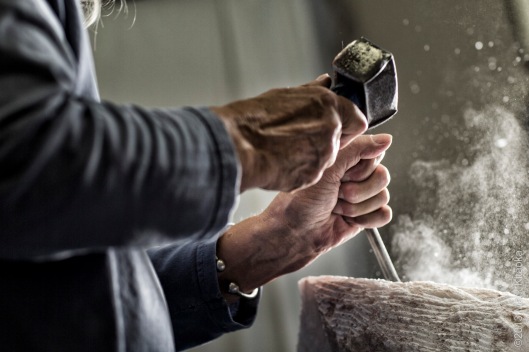 15 When morning dawned, the angels urged Lot, saying, “Get up, take your wife and your two daughters who are here, or else you will be consumed in the punishment of the city.” 16 But he lingered; so the men seized him and his wife and his two daughters by the hand, the Lord being merciful to him, and they brought him out and left him outside the city. 17 When they had brought them outside, they said, “Flee for your life; do not look back or stop anywhere in the Plain; flee to the hills, or else you will be consumed.”

26 But Lot’s wife, behind him, looked back, and she became a pillar of salt.

Have you ever been consumed by something, something that demanded all of your time and energy? Day and night, at work or asleep, the same thoughts, the same longings pulling at your heart, but you couldn’t break free, you couldn’t let it go. You didn’t intend for it to be this way. Perhaps it began as a simple diversion; but then it became anchored to your soul. Consumed…….

The story of the destruction of Sodom is a warning against allowing things to consume us. The city was consumed with sin. The people’s desire became a frenzied lust for more and more, an insatiable appetite for personal pleasure; therefore God chose to destroy it.

Lot’s family was told to get out and warned not to look back as the city was being destroyed. But Lot’s wife did, she turned and looked  ……… and she was changed into a pillar of salt. Some suggest that she may have, “looked back with yearning” for her old life. It’s possible that she was  punished for her disregard of the word of the Lord. Either way, she became a monument testifying to the danger of disobedience.

How Lot and his family lived among such wicked people in the first place is a mystery. (Then again, I don’t know that our society today is that much different.) Yet, when destruction was upon them, they were given an opportunity to escape.

There is always an escape ……..

13 No temptation has overtaken you but such as is common to man; and God is faithful, who will not allow you to be tempted beyond what you are able, but with the temptation will provide the way of escape also, so that you will be able to endure it.

The sin of Sodom may appear more wicked than our own but don’t be so quick to judge: all sin is powerful and consuming and can easily gain influence over us. Given the opportunity, it will exhaust all of our emotional and physical resources, monopolizing the energy that should be used for other more profitable activities.

I would not share this story if I couldn’t say from experience that even after my conversion, there have been episodes in my life when because of my weak human nature, I have fallen under the control of my own sinfulness. Out of selfishness or arrogance or whatever, I allowed something I desired to sway my decisions and actions. This is NOT the place God wants his children, and thanks be to him, he smashed the pillar of salt that was crushing my soul.

Perhaps, like me, you have glanced aside at something you shouldn’t have. You’ve allowed it too much time in your mind and now it’s threatening to own you, turn you into a pillar of salt, an immovable statue with no life, cemented into a place you regret. There is a way to undo the curse; you can reverse its effect. The Lord is merciful; he will take you by the hand and lead you out of the city of destruction. He will blast the hard shell of sin that is dominating you. The salt will break away, allowing you to breathe and live again with fresh enthusiasm and renewed freedom.

6 and if He condemned the cities of Sodom and Gomorrah to destruction by reducing them to ashes, having made them an example to those who would live ungodly lives thereafter; 7 and if He rescued righteous Lot, oppressed by the sensual conduct of unprincipled men 8 (for by what he saw and heard that righteous man, while living among them, felt his righteous soul tormented day after day by their lawless deeds), 9 then the Lord knows how to rescue the godly from temptation, and to keep the unrighteous under punishment for the day of judgment, ….

Today as you raise your mug, know that every curse can be broken and every person freed from the evil that consumes them.